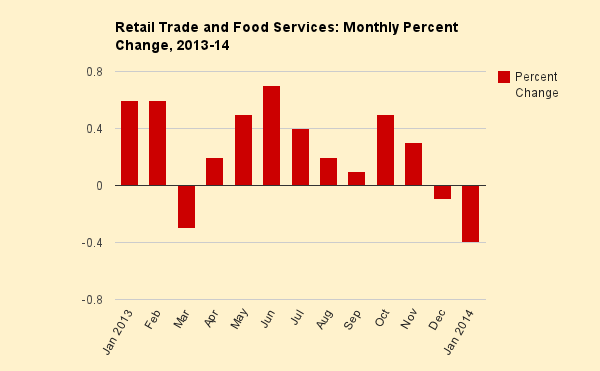 Retail sales fell in January as harsh winter weather across much of the country kept shoppers out of stores. But after months of slow income growth, the decline shows that consumers are increasingly unwilling to part with their hard-earned money, no matter the weather.

Retailers saw a 0.4 percent drop in sales last month, the Commerce Department said Thursday. That’s the largest decline in more than 18 months — worse than economists predicted. Auto dealers took much of the hit, with a 2.1 percent decrease in sales amid frigid temperatures and fewer showroom visits. Excluding autos, retail sales stayed flat for the month. Sales in December were revised down to a 0.1 percent drop from November.

“Weather’s played a role, but it doesn’t account for numbers like these,” said Peter Morici, a business professor at the University of Maryland.

Consumer spending led the economy to 3.7 percent growth in the last six months of 2013, its strongest performance since 2003. And the National Retail Federation predicted last week that retail sales — excluding autos, restaurants and gas stations — will increase 4.1 percent in 2014.

But disposable personal income, adjusted for inflation, fell 0.2 percent in December after weak showings in October and November. And without more money in consumers’ pockets, continued robust spending isn’t sustainable.

“Consumers got out ahead of their incomes in November and December, so now they’re sort of taking a breather,” explained Morici.

“This means that first quarter growth is going to be slow.”

Some economists were reluctant to take the dismal retail sales numbers to heart. Record snowfall and freezing temperatures in January forced shoppers to stay home, making the retail sector less reliable as a gauge of overall economic health.

“Much of the economic news right now is quite worthless because of the weather impact,” said Markus Schomer, chief economist at PineBridge Investments.

“It’s going to be April before we really know where we are.”

More than two-thirds of the industries surveyed reported a drop in sales from December. Online and catalogue sales, which have otherwise increased 6.5 percent since January 2013, fell 0.6 percent. Sales of clothing and clothing accessories decreased 0.9 percent. Electronics and appliance stores posted modest gains of 0.4 percent since December, but have seen a 4.7 percent decrease in sales since last year.

One bright spot was sales of building materials, which jumped 1.4 percent since December and 3.7 percent since January 2013. Construction firms also added 48,000 jobs in January, offsetting a loss of 22,000 jobs in December, which could be good news for the housing sector.

“We have cold winters every year,” said Peter Morici. “This isn’t the Ice Age.”