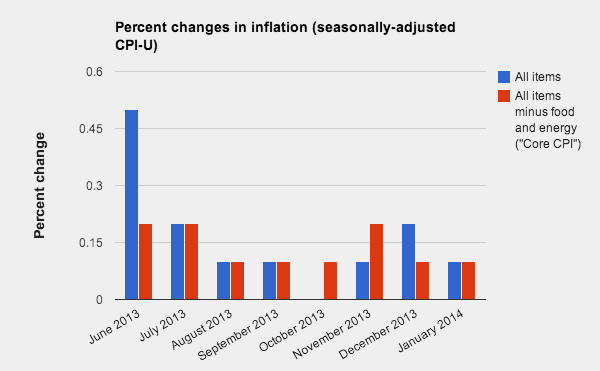 The cost of living in the U.S. rose slightly in January, reaffirming the economy’s sluggish recovery.

The 0.1 percent increase in the consumer price index, reported Thursday by the Labor Department, was in line with economists’ predictions and continued a trend of weak gains.

Apparel prices and new vehicles both decreased by 0.3 percent in January while food prices increased by 0.1 percent. The slight increase in inflation was driven by unusually harsh winter weather as demand increased for natural gas and propane.

Inflation rose 1.5 percent in 2013, the smallest calendar year gain in three years, after a 1.7 percent year-over-year advance in 2012. The December inflation report marked the first time prices had gone up by less than two percent for two consecutive years since 1998.

“In a sense, the big story is that there is no story with inflation these days,” said Bill Cheney, an economist at John Hancock Financial Services. “The overall mediocre state of the economy is the reason we have minimal inflation.”

The core index minus food and energy — so-called volatile costs — rose 1.6 percent over the last 12 months, the smallest 12-month change since June. That figure rests below the Federal Reserve’s target rate of two percent.

The Federal Reserve has been injecting money into the economy since 2008 through its quantitative easing program, aiming to spur lending and economic growth. That should lead to hiring and in turn, higher demand for goods and increased prices.

But the money influx has had little impact on the economy, according to Lee Ohanian, an economics professor at UCLA.

“The employment rate — the fraction of the population working — is lower now than during the financial crisis,” Ohanian said in an email. “There is little evidence that these policies have stimulated economic activity.”

Economists do not expect real wage growth in the near future because unemployment is too high, said Christopher Phelan, an economics professor at the University of Minnesota.

“There’s still 6.5 unemployment. There’s not enough,” Phelan said. “Wages get driven up when firms have to raise the stakes to get somebody.”

But low inflation could be helpful for workers.

“The fact that there is minimal inflation means there is not a lot of pressure coming from higher cost of living for people stuck with stagnant wages,” Cheney, the economist at John Hancock Financial Services, said.

The January inflation report was driven by natural gas prices, which advanced 3.6 percent and were driven by unusually harsh weather. These increases, fueled by propane shortages in the Midwest, more than offset a decline in the gasoline index, resulting in a 0.6 overall percent increase in the energy index since December.

“With energy commodities in the winter, you’re liable to see price movements and we’ve certainly seen it in natural gas and propane prices,” Cheney said.

Propane prices averaged $3.17 per gallon in January, the highest since October when records were first collected for this winter, according to the Energy Information Administration.