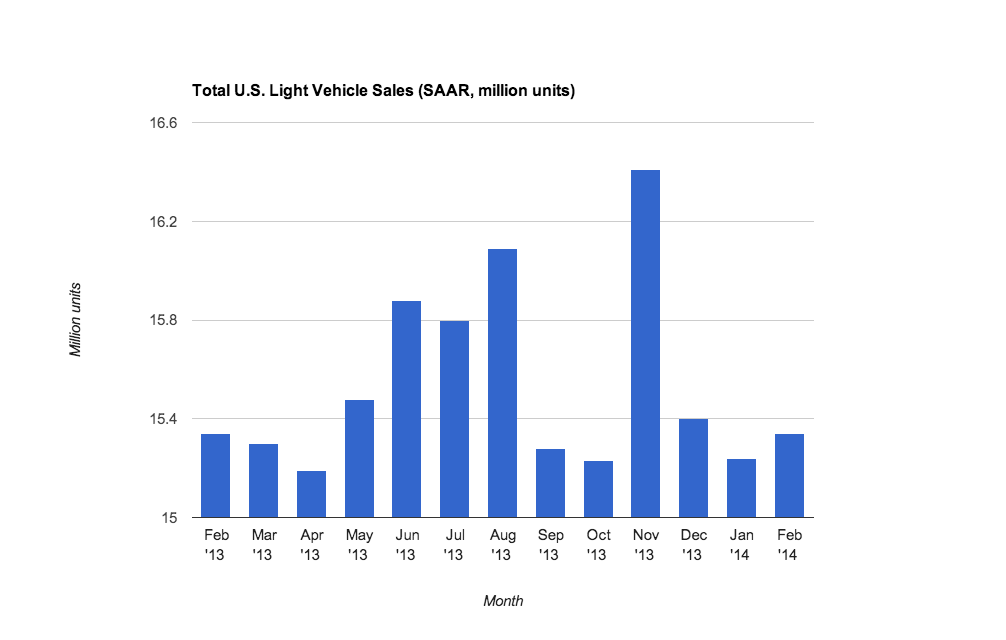 Harsh winter weather froze up auto sales in February. With temperatures in parts of the country hovering near zero, new vehicle sales were sluggish, continuing a three-month streak of auto sales falling below expectations.

Final new-vehicle sales came in at 1.19 million, on the low end of analysts’ 1.2 million forecast for February. The month’s seasonally adjusted sales rate was 15.34 million, about even with last year’s sales, according to Autodata.

With this winter’s polar vortex blasting the Northeast and parts of the Midwest, many dealerships spent days closed and potential customers were inclined to skip trips to showrooms this month.

“People were mostly concerned with being home and being warm,” said Kevin Tynan, a senior auto analyst at Bloomberg.

Sonic Automotive, one of the country’s leading automotive retailers, particularly felt the winter chill. Out of the company’s 118 dealerships, 105 were closed between three and four days this winter, losing valuable sales opportunities.

Car parts makers fared better than dealerships, since tires, brakes and other parts wear out more easily in the snow. AutoZone, the second-largest auto parts retailer in the U.S., increased its revenue by 7.3 percent in February to $2.0 billion.

When spring temperatures begin to break through and more construction projects start up again, pickup sales are expected to rebound.

“Not to blame everything on the weather, but I think you’ll start to see things pick up when more housing starts to come back, which will happen in the next couple of months,” said Tynan. Many roofers and contractors stay home with no work during the winter months, he said.

But bad weather did boost sales of crossover vehicles and SUVs. Nissan and Chrysler both squeaked out double digit year-over-year growth, due to successful sales of all wheel drive vehicles. Chrysler’s Jeep brand experienced its best February sales ever.

“The severe weather has been ideally suited for our legendary Jeep 4×4 capability,” said Reid Bigland, Chrysler’s Head of U.S. Sales, in a statement Monday.

As weather conditions improve in coming spring months, sales are expected to recover as well.

“January and February are always low in sales even when the weather is good. Spring sales are bound to pick up,” said Alan Baum, an auto analyst at Baum & Associates.

Automakers are depending on it. After posting a year-over-year sales dip of 1 percent in February, GM is gunning for better sales next month, applying heavy incentives to its pickup trucks. Dubbing March “Truck Month,” the company has stirred some concern by offering steep incentives– even on its brand new 2014 Chevy Silverado, which was intended to boost GM’s profitability.

Still, automakers and analysts aren’t fretting over aggressive incentives or February’s slow sales yet. Alec Gutierrez, an auto analyst at Kelley Blue Book, an automobile valuation company in California, said that his company hasn’t changed its optimistic outlook for 2014.

“We’re expecting a nice bounce back for March, provided the weather gets better, ” said Gutierrez. “Historically March is one of the strongest months for sales. There’s pent-up demand from the cold weather, so more folks more willing to get out there and buy a new car.”