Retail Sales Bounce Back as Shoppers Warm Up

Retail sales rebounded in February after a three-month slump, suggesting that consumers’ reluctance to spend is thawing along with the cold.

Some retailers even benefited from February’s icy weather. Sales of snow shovels and space heaters made up for the loss of foot traffic in his store last month, said Peter Leopoldi, who owns Leopoldi Hardware in Park Slope, Brooklyn. Salt in particular was a hot seller.

“Every three or four days we would run out and scramble to get more,” he said. “The supply wasn’t enough.”

Consumer spending increased by a seasonally adjusted 0.3 percent in February, the Commerce Department said Thursday, modestly surpassing the 0.2 percent increase economists predicted. Auto sales also rebounded by 0.3 percent after posting declines the previous two months. January sales were revised down to a 0.6 drop from December, which many attributed to freezing weather across the country.

“The adverse weather that we saw just put a damper on overall sales activity,” said Michael Carey, chief economist for North America at Credit Agricole CIB. “You really can’t read a whole lot into this.”

Last week’s encouraging jobs report was a more reliable sign of good things to come, Carey said. Firms added 175,000 jobs in February after two months of meager growth, and average hourly wages increased by 2.2 percent in the past year.

Still, Debi Triola, who runs Fashions in Flowers in Northport, Long Island, said the wintry weather hit her business hard. On an average month about 2 percent of the flowers she imports arrive damaged to her store. But mid-February snowstorms delayed flights and froze flowers in their cargo holds, leading to especially extensive damage, she said.

“Four days before Valentine’s Day, I returned half of the roses I bought,” she said. “That’s huge.”

Would-be shoppers also chose to spend money keeping their homes and families safe during the back-to-back snowstorms, said Triola, who is president of the Northport Chamber of Commerce.

“People don’t have that extra spendable income,” she said. “They spent it on bread, milk and eggs every time the news said we were getting a storm.”

After two months of downwardly revised retail sales data, some analysts are concerned that weak spending is a trend that goes beyond the cold.

Mortgage and consumer debt as a percent of disposable income has decreased the past few years, according to the Federal Reserve Board, allowing consumers to spend more freely. But that hasn’t led to a big windfall for retailers so far, Moran said, since consumers are choosing to pay off their mortgages and credit cards instead. 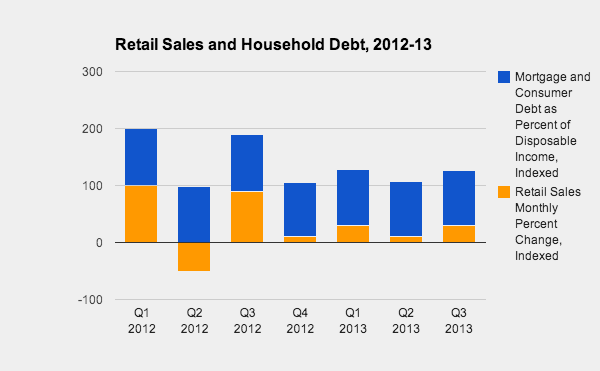 It’s all adding up to a more dismal first-quarter picture than analysts had predicted, said Jay
Morelock, an economist at FTN Financial.

“Consumers are not spending in any way like we thought coming into 2014,” he said. “What we assumed would be a real strong point in the economy has turned out to be a disappointment.”