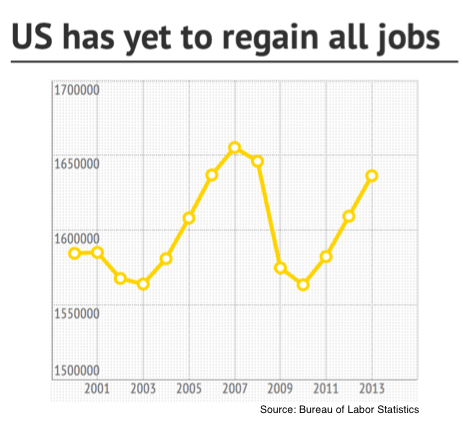 Economists predict a jump in job growth ahead of the March jobs report tomorrow but caution the economy is nowhere near full recovery.

Economists surveyed by Bloomberg predict 206,000 nonfarm jobs were added last month, up from 175,000 in February. Businesses added 191,000 jobs in March, payroll processor ADP said earlier this week, more than any of the last four months reported by the Labor Department.

Warmer weather should account for much of the growth in trade, transportation and construction, which were particularly hard hit by the cold winter. Some economists, such as Tom Simons, an economist with Jefferies LLC, even expect private payrolls to return to pre-recession rates.

But others doubt the significance of that threshold, since the economy has yet to regain all jobs lost in the 2008-2009 crisis.

“I cannot see anything economically meaningful about” passing the private jobs marker, said Heidi Shierholz, a labor market economist at the liberal-leaning Economic Policy Institute. “Just getting back to the December 2007 level is so far below where we need to be.”

Jobs are important to the recovery since 10.5 million people are unemployed, nearly 4 million of whom have been out of work for more than 27 weeks. While the economy has added jobs since the crisis, many are part-time or in low-wage sectors such as retail and food.

Low-paying jobs “have been growing as a share of the economy for awhile now,” said Dan Hamilton, director of economics at the Center for Economic Research at California Lutheran University. “And that keeps wage growth down.”

Adjusted for inflation, wages have stayed flat since at least 2006.

On the whole, wage growth has been weak ever since the crisis. In the lead-up to 2008, hourly wages were growing by about 3.5 percent per year. Growth has slowly been ramping up since the crisis, but remains at only about half of what it used to be.

Average hourly wages grew 0.4 percent in February, the highest uptick in eight months, marking a possible turning point in the slow recovery. But February’s wage gains were concentrated in few industries — namely construction, oil and gas and trucking — and were likely gamed by weather.

Workers put in fewer hours because of the cold temperatures, which drove up average hourly earnings, said Sarah Watt House, an economist at Wells Fargo.

“We might see that fall or decelerate [in March] just as we see a pickup in the number of hours worked as the weather gets better,” Watt House said.

With an overabundant supply of workers, employers have little incentive to increase wages.

Economists surveyed by Bloomberg expect unemployment in March to drop slightly to 6.6 percent. That drop could be for a number of reasons: maybe more discouraged people dropped out of the labor force, maybe more people retired, or maybe more people found jobs.