Wages grew unexpectedly in February, but there is little yet to cheer over.

While wages are growing in certain segments, such as construction, most industries aren’t becoming more lucrative because there’s still a surplus of workers. That has led industries like retail, which had been been supporting the recovery, to increasingly fill spots with part-time workers, since they don’t have to spend as much on benefits for them.

“There is no incentive to raise wages,” said Lindsey Piegza, chief economist for Sterne, Agee & Leach, Inc. “We still have a tremendous amount of slack” in the labor market.

With unemployment at 6.7 percent, wages are unlikely to increase anytime soon, meaning inflation this year should remain below the Federal Reserve’s 2 percent target. In turn, the Fed should keep interest rates low in hopes of boosting the sluggish economy.

Inflation-adjusted wages have been flat since at least 2006, resulting in less spending on the part of consumers. While wages ticked up 9 cents in February, they fell back to Earth and dropped 1 cent last month. 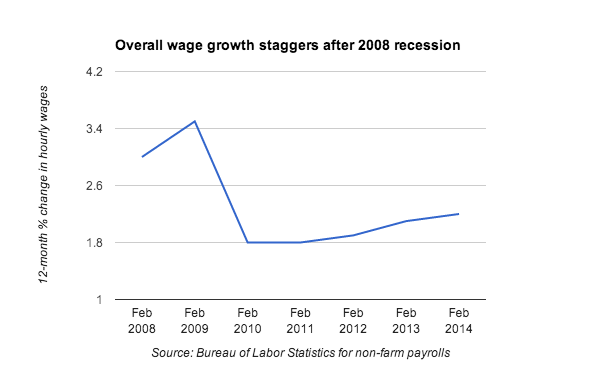 Even worse, the sectors that have been seeing wage growth are slowing down. Wages in business and financial services were growing at a 5.2 percent annual rate in March 2009. But five years on, annual growth is settling below 2 percent. 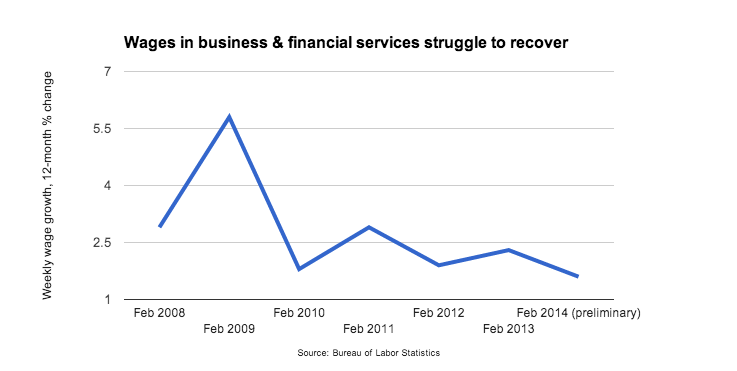 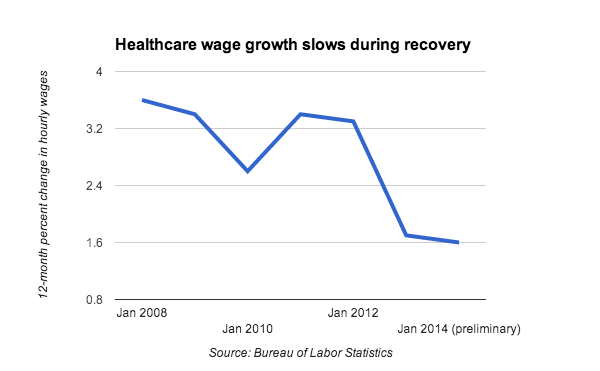 In health care, too, where job growth continued despite the recession, hourly wages have been growing at a slower rate over the last two years, as hospitals replace higher-wage workers with lower-credentialed ones — “nurse aides instead of nurses,” said JD Kleinke, a health economist who has written three books on U.S. health care. 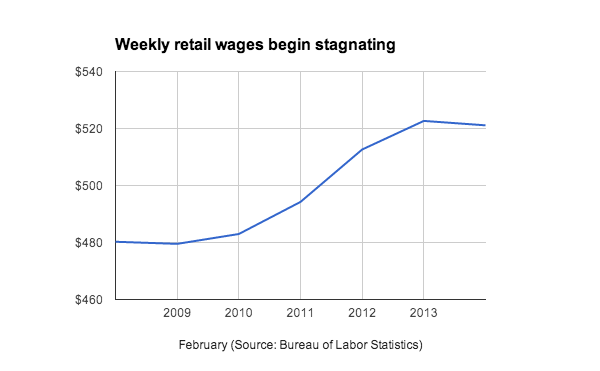 That’s consistent with what other economists have noticed, namely more hires among low-skilled workers, said Bianca Frogner, a health economist and professor at George Washington University.

And while hourly earnings have grown in retail ever since last year, weekly wages are stagnating, suggesting more people are stuck in part-time jobs. 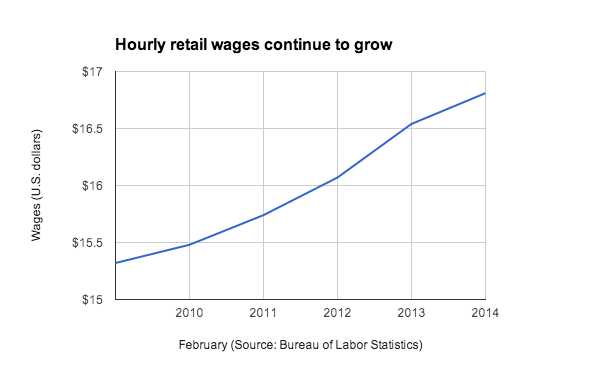 This development can have long-term implications, especially in retail, as workers become more transient and are less likely to develop the skills that will help them advance, said Piegza.

“It certainly keeps these individuals stuck in jobs rather than careers,” Piegza said.

Where wages are growing

Earnings are rising in construction, trucking and oil services, where workers can command top pay because shortages of qualified workers.

But the February gains were also likely gamed by weather. Workers put in fewer hours because of the cold temperatures, which drove up average hourly earnings, according to Sarah Watt House, an economist at Wells Fargo.

Wages and inflation, the chicken or egg syndrome

Inflation and wages are intertwined. When wages pick up, people spend more, which hikes up prices. On the flip side, when prices spike, employees ask for higher wages.

Since both inflation and wage growth have been sluggish, solving the stagnation conundrum evokes the “chicken or egg” syndrome: which should be fixed first to boost the economy — inflation or wages?

Not that economists expect wages to increase dramatically anytime soon.

“As long as we’re above the natural rate of unemployment [of about 5.5 percent], we’re not going to see a lot of wage gain,” said Watt House, referring to the healthy amount of unemployment in which some workers look leave jobs to look for better ones.

Because wage growth remains low, inflation is unlikely to increase. Inflation has been dipping below the Federal Reserve’s 2 percent target since 2012.

As long as inflation stays low, the Fed is likely to keep interest rates low by continuing its bond-buying program. The Fed had planned on halting asset purchases once the unemployment rate hit 6.5 percent but abandoned that measure in March, after unemployment hit a sooner-than-forecast 6.7 percent.

Economists surveyed by Bloomberg expect the consumer price index to hit 2 percent growth in 2016 but not everyone is convinced.

To be sure, benefit costs have also increased over the period that wage growth has remained flat. The average employer paid $26.09 in benefits for every hour an employee worked in 2007, according to the Bureau of Labor Statistics. In 2013, that figure was $29.28.

Benefits have also risen more than wages over the last year, according to Watt House, the Wells Fargo economist.

But employers are also shifting increasing health costs to employees, who are paying more than $100 more each month for health care compared with just three years ago, according to a survey of 595 large companies by Towers Watson, a benefits consultant, and the National Business Group on Health, a Washington-based employer alliance.

The total employee cost share has climbed from 34 percent in 2011 to 37 percent this year.

“We’re seeing a degree of structural change in the economy,” said David Jaeger, an economics professor at Queens College.