Auto Sales Revved Up in March 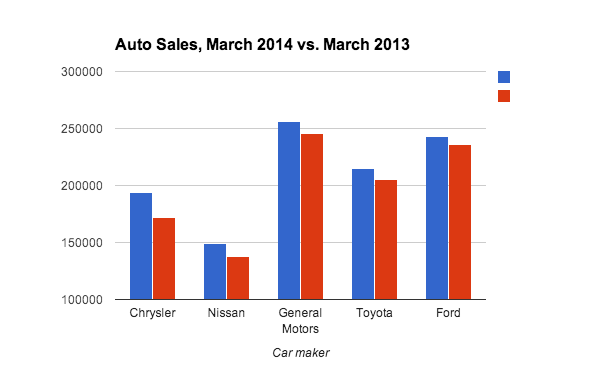 Thawing winter weather drove up auto sales in March, giving the industry some hope after a bout of sluggish sales in the first two months of 2014.

Brian Randio, a marketing manager at Orange Ford in Albany, NY said that more buyers visited his dealership this month compared to February. Randio said that incentives and melting snow brought more people out to purchase cars this month.

“Especially over the weekends we saw more people coming in,” said Randio. “There were some really nice weekends.”

Though the auto industry has been booming for the past two years, this winter’s slow sales sparked concern that post-recession pent-up demand for cars may mostly have been released already.  This spring will be a crucial barometer of the auto industry’s health. March seemed to offer a promise of more robust sales in coming months.

“It was a good rebound month,” said Kevin Tynan, a senior auto analyst at Bloomberg. “Consumers are still fairly confident.”

Luxury vehicles also fared well. Lincoln, BMW, Lexus and Porsche all posted double-digit gains. Lincoln sales were up 31 percent, Lexus sales were up 23 percent and BMW sales were up 19 percent.

During the slowdown in winter months, many automakers accumulated high inventories. This inventory buildup encouraged car makers to apply incentives to their vehicles in March, contributing to the month’s strong overall sales. The average incentive per light vehicle was $2,773 in March, an increase of 7.9 percent from March 2013 and up 2.6 percent from February, TrueCar estimates.

While high incentives can drive overall profits down, Tynan said that the industry’s level of incentives is still healthy.

“There’s room to even add incentives to increase demand,” said Tynan. “Obviously you’d like to see it as low as possible, but it hasn’t gotten to the point where inventory is truly a concern.”

To keep pace with 2014 auto sales forecasts, sales will have to remain high through spring to make up for January and February’s disappointing numbers. Analyst forecasts for overall seasonally adjusted sales rates (SAAR) in 2014 range from as high as 16.5 million, as Jesse Toprak estimates, to LMC Automotive’s estimate of 16.2 million.

Auto sales performance in the spring selling season from March through May is an important indicator of the health of the auto industry.

“If sales are strong in that period, it’s a good sign,” said Alan Baum, an auto analyst at Baum and Associates. “If not we’ll probably start seeing more incentives and production decrease, both of which are costly.”

Based on March sales, analysts hold out cautious optimism that growth will continue.

“This sets a good stage for spring,” said Jessica Caldwell, a senior analyst at Edmunds.com, an auto researcher.  “Judging by what we’ve seen in March, there are some market dynamics that will keep sales relatively high,” said Caldwell.