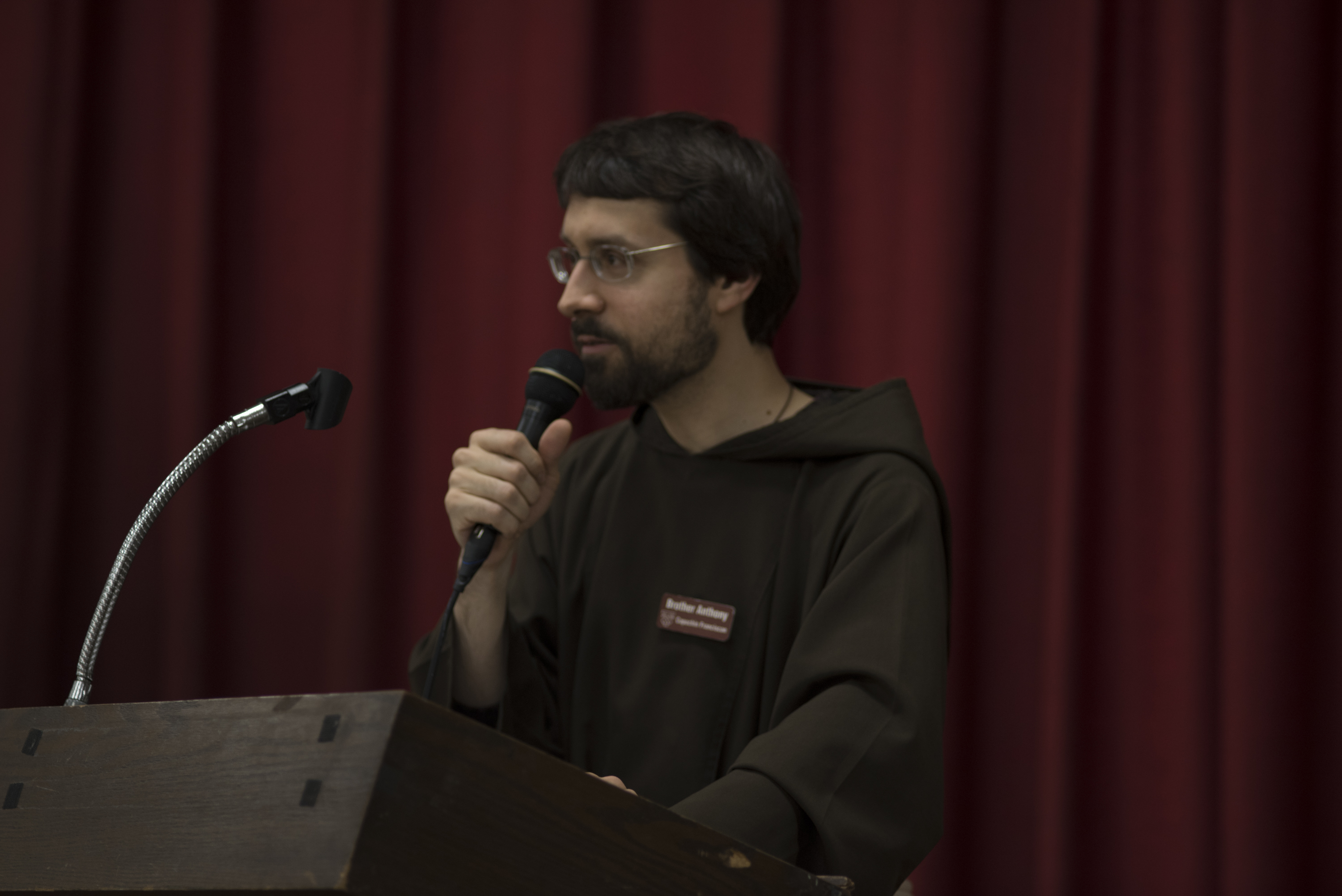 Cash-strapped New York laborers like Carlos Vega formed the rank and file of Fight for $15, the nationwide campaign to raise the minimum wage. But despite winning a once-inconceivable victory—convincing New York to raise its minimum wage to $15 by 2021—Vega is not celebrating. Instead, he is mobilizing for another fight.

“I use my faith in God to fight because I know we are going to win $20 an hour,” said Vega, a worker who cleans the cabins of JetBlue aircraft.

Vega is part of a small group of activists led by Anthony Zuba, a Catholic mendicant friar who sees a living wage—not just a traditional minimum wage—as a moral issue. On May 8, Zuba called Vega and a coalition of workers’ rights activists to gather in St. John’s Hall, a block from Penn Station, in order to lay the groundwork for a faith-led fight for $20.

LivingWage1 from George Goss on Vimeo.

But in pushing for a living wage, Zuba and his followers are butting up against the more moderate leaders of the Fight for $15 movement, who would rather consolidate their victory and focus on winning union representation for fast food workers. Berlin Rosen, the high-powered public relations firm that helped spearhead the $15 movement, is not backing Zuba’s effort.

“This is not a case of us underbidding ourselves,” said Berlin Rosen’s Madeline Kaye, spokeswoman for Fight for $15. “Fifteen was our goal, and now workers need unions.”

It was not long ago that $15 was the radical position. Initially, the Fight for $15 was met with an icy reception in the state’s capital. In March 2015, Gov. Andrew Cuomo offered a counterproposal of $11.50 in New York City and $10.50 for the rest of the state to the activists. He said that anything higher might put the state’s economy in jeopardy.

Then Cuomo did an about face and Republican legislators fell into line after successfully bargaining for a $4 billion tax cut.

“The Republicans also knew that raising the minimum wage was very popular with the voters and supporting it in the end, unanimously after all, took away that issue from potential Democratic challengers,” said the Fiscal Policy Institute’s chief economist, James Parrott.

The rare showing of bipartisan support for a statewide increase to $15 by 2021, and in New York City by 2019, made the victory all the more stunning.

For workers like Vega, it could be sweeter still.

“We are killing ourselves just to wake up in the morning, and we are still getting short-changed every possible way,” Vega said.

Yet the division between the two groups threatens to compromise the movement’s solidarity just as a $15 minimum wage is becoming a national trend. First, California. Then, New York. Coupled with city initiatives in places like Seattle, 20 percent of Americans now live in areas that have or are about to have $15 minimum wage laws.

“The challenge is you have to win a geographic lottery to get a decent wage,” said Secretary of Labor Tom Perez, who supports the increase to $15.

But even many liberal economists who supported the Fight for $15 campaign are skeptical of the Franciscan’s call for $20. Their argument boils down to the economic fundamentals of supply and demand: They worry that if the minimum wage is too high, businesses could be forced to cut jobs, automate work or move their enterprises to a region with lower costs.

Seventy-nine New York economists and social scientists affirmed that $15 was the right amount. Organized by Parrott, they signed a petition in support of the governor’s legislation.

Howard Chernick, one of the signatory economists and a researcher at the Institute for Research on Poverty, warned that anything more could be harmful to the economy.

“The minimum wage could be set too high, with bad consequences for low-wage employment and the competitiveness of our city and region,” Chernick said.

Ironically, disregarding the dollar amount, this is ideologically comparable to the conservative argument against the minimum wage.

The day before a crushing defeat in the New York primary, erstwhile presidential contender Sen. Ted Cruz lectured supporters on the Upper West Side about the foolishness of raising the minimum wage.

“So a bunch of New York politicians decided on a $15 per hour minimum wage,” Cruz said to a cheering crowd of about 100. “What they are saying is that anyone who can’t produce $15 worth of productivity is about to be fired.”

Another argument is one made by upwardly mobile millennial workers: The job is just not meant to be permanent.

“I do not see my minimum wage job supporting me through life, but as a stepping stone for moving on to bigger and better things,” said Emily Apple, 24, who works at Staples.

Zuba, however, sees a living wage as a moral imperative. Paraphrasing Martin Luther King Jr., he said that it is a matter of justice for an employer to pay enough for his employees to live on. In New York, he said the situation is particularly dire.

At least 2.7 million New Yorkers struggle with income inadequacy, a term coined by Diana Pearce of the University of Washington for the post-Great Recession phenomenon of working full time, but barely paying the bills.

“As to what to set the minimum wage at, it is entirely political,” Pearce said. She added that the closer the minimum gets to a living wage standard, the better for everyone.

Carolyn Epstein, the co-owner with her husband, Charles Mullin, of BookBook, a bookstore on Bleecker Street, said that increasing the minimum wage would make it harder for her to run a profitable business. In addition to regularly working themselves, the couple employs part-time help on a two-shift rotation.

Despite the risks to businesses, the Rev. Peter Heltzel, a founding member of Living Wage NYC, reaffirmed that a living wage is the moral responsibility of employers. He spoke before Vega at Zuba’s gathering. Heltzel wants New York City Mayor Bill De Blasio, a self-described progressive, to create a living wage commission to study how much it costs to live in the city.

Heltzel is critical of the Fight for $15 movement, which he said had been commandeered by “Big Labor.”

“Brother Anthony’s the real deal,” Heltzel said. “I’m confident the campaign for the $20 living wage in New York will be successful.”

The tension between the two groups is mutual.

The Fight for $15 campaign was quick to deny any connection with Living Wage NYC or any others who are advocating for $20.

“I don’t know who these folks are. They haven’t been big partners of ours,” Kaye said.