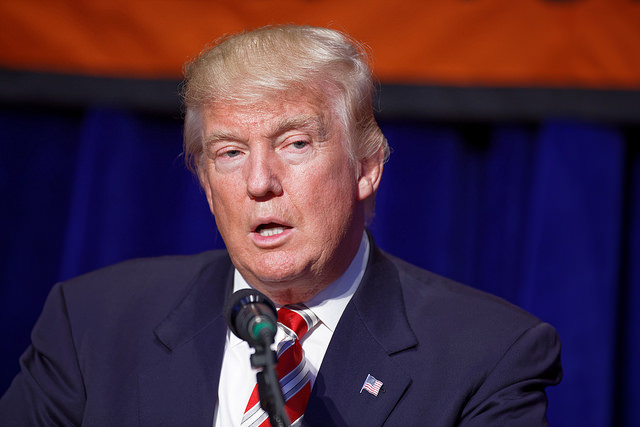 The Trump tax cuts spurred a sharp increase in Americans’ take-home pay at the outset of 2018.

After-tax income grew at a rate of 0.9 percent in January, the fastest growth of any month since December 2012, according to a report released by the Bureau of Economic Analysis on Thursday. The gains include tax savings as well as the $30 billion in one-time bonuses given out by companies in the wake of the measure’s passage in December.

This infusion of take-home pay reached an economy in its ninth year of an expansion that will likely accelerate as consumers spend their newfound cash.

“The tax cuts will give the economy an extra jolt this year,” said Sal Guatieri, a senior researcher with BMO Financial Group, a financial services provider.

If so, Republicans will tout this correlation between economic growth and the tax cuts as the midterm elections approach in November.

Important to note: The tax cuts took effect in January, so the BEA reported the impact on after-tax income for the month. But most companies didn’t adjust withholding until February, meaning savings had yet to reach consumers’ pockets. 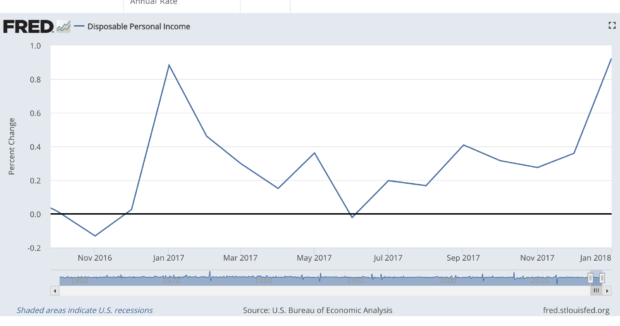 But in January consumer spending slowed, growing half as quickly as it did at the end of 2017. The savings rate, meanwhile, rose slightly to 3.2 percent. This slowdown in consumer activity is in line with a steep decline in retail sales, as Americans offset Christmas splurges with a relatively frugal start to the new year.

U.S. incomes—reflecting Americans’ pretax earnings from salaries, investments and other sources—increased at a robust rate of 0.4 percent in January, carrying over momentum from the last quarter of 2017. The strong pretax income growth, resilient in spite of a fall in total hours worked, affirms the hourly wage spike found in the January jobs report.

“With tightness in the labor markets, we’re starting to see a little upward pressure on wages,” said Hugh Johnson, the chairman of Hugh Johnson Advisors LLC, an investment advisory firm.

It remains unclear whether that long-awaited wage growth was a one-month aberration or the beginning of a trend.

The after-tax income gains brought on by the Trump tax cuts, however, are here to stay—at least until they expire in 2025.

The Bureau of Economic Analysis estimates that the Trump tax cuts reduced Americans’ personal current taxes—meaning those paid on income, capital gains and property—by $115.5 billion at an annual rate. Those significant savings align with the spike in after-tax income growth.

“What are corporations going to do with those?” he asked.