Union Decline Is to Blame for Wage Stagnation, But Union Resurgence May Solve It 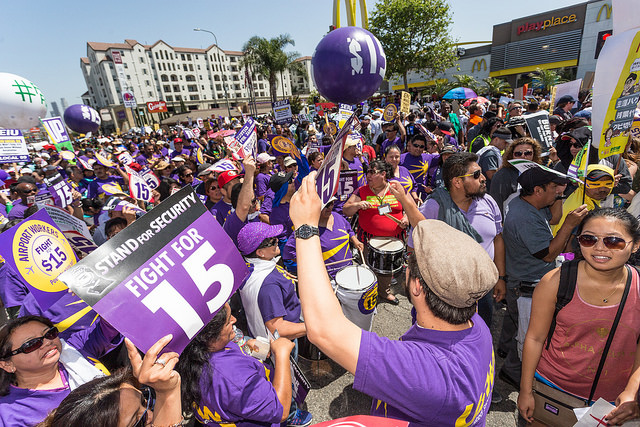 Shannon Johnson eats one meal per day, often consisting of a can of tuna and celery sticks. Her job in food service at Disneyland Resort, a set of hotels next to the theme park in Anaheim, California, pays an hourly wage of $11, the state minimum. When she leads a shift, it’s $12. Her hours vary significantly from one week to the next, as does her paycheck.

She and her 30,000 coworkers are asking for a raise, but not from Disneyland Resort. They’re counting on the residents of Anaheim. After contract negotiations with the company stalled, a coalition of unions submitted a city ballot measure this month that would require the resort and other large employers to pay an $18 minimum wage.

The campaign exemplifies an increasingly common model of labor advocacy: Rather than bargain with their employers, workers are pushing state and city governments to grant them wage increases. The teachers’ strike in West Virginia earlier this month is the latest example of the strategy, which came to prominence in recent years with the Fight for $15, a union-backed fast food worker movement that has led successful minimum-wage campaigns across the country.

The organizing model has arisen alongside a puzzling trend: As the economy hums along in its ninth straight year of growth, wages have remained relatively stagnant. Economic fundamentals say a tight labor market should drive up worker pay. One reason it hasn’t, some economists have argued, is the decline of union membership and power. But by winning pay increases through legislative means, unions have found a partial solution that benefits members and non-members alike.

“People are now using the legislative process and the political process to get things that would normally have happened at the bargaining table,” said Randi Weingarten, the president of the American Federation of Teachers.

Only 10.7 percent of American workers belong to unions, just over half of what the membership rate was in 1983, the first year for which comparable data is available from the Bureau of Labor Statistics. Last year, nonunion workers brought home 80 percent of the earnings that union members did, a disparity that remains significant when one accounts for differences in education and experience.

Now unions face a new threat: Janus v. AFSCME, a Supreme Court case awaiting a decision, may do away with mandatory dues payment for public sector unions. If so, the number of workers that directly benefit from union-bargained contracts will likely shrink even further.

Opponents of private-sector unions argue that the labor organizations raise wages above the rate set by a free market, making companies less flexible and ultimately hurting workers. Union membership has declined, they argue, because global competition and the shift to a service economy has rendered them irrelevant. “It’s important to recognize the hidden costs of union wage premiums,” Aparna Mathur and Mark J. Perry, scholars at the conservative American Enterprise Institute, wrote in a September blog post. “In the long run, those wages reduce the profitability of their employers, and investment in the global economy will move away from companies with such high costs and low profitability.”

Facing declining membership and new legal challenges, unions are trying a different tactic: public pressure. Fight for $15, launched in 2012 with backing from the 2 million-member Service Employees International Union, began with two demands on behalf of fast food workers: $15 base pay and a union. The wage demand quickly rose to the fore.

The workers, who don’t belong to the union and haven’t paid a dime in dues, have used headline-grabbing single-day strikes to put pressure on city and state governments, rather than restaurants. The campaign won minimum wage hikes in cities and states across the country, including its titular wage floor in California and New York. According to the left-leaning Economic Policy Institute, 4.5 million workers in 18 states benefited from minimum wage hikes at the outset of this year.

In West Virginia earlier this month, striking teachers won legislation that raised their pay by 5 percent. Lacking collective bargaining rights, the teachers found themselves in a similar position as nonunion fast food workers. Militant tactics bolstered public support, as they had for Fight for $15. “The strike made people aware of how bad things were,” said Jay O’Neal, a middle school teacher in Charleston, West Virginia. “When people found out, they were sympathetic.”

The Oklahoma Education Association, the top teachers union in the state, announced a statewide school closure set to begin on April 2, unless the Legislature passes a bill that raises pay. In Anaheim, workers at Disneyland Resort are gathering the 20,000 signatures necessary to put their wage hike on the ballot.

“The Fight for $15 broke the ice,” said Austin Lynch, an organizing director at Unite Here who has led the Anaheim ballot strategy. “Workers are being pushed to the edge. They’re going to stand up and find a way to do something about it.”