Donnette Leftord of Flatbush, NY, won’t be able to pay rent on May 1. Leftord runs a small cleaning company. A few weeks ago, she learned that she was exposed to the virus when a woman whose apartment she cleans, died of COVID-19.

“I have lupus, and am trying to quarantine in a friend’s apartment, because I’m afraid to expose my daughter and husband,” she said. With clients now staying home and practicing social distancing, they have no need for Leftord’s services.

With millions of Americans having filed for unemployment, and businesses remaining closed for the foreseeable future, there is growing concern in the rental housing market. Rental strikes have started in cities like San Francisco and Chicago. New Yorkers plan to begin striking on May 1. But the collective withholding of rent could impact landlords’ mortgage payments.

“Housing is a foundational element of every person’s well-being,” wrote Chris Herbert, managing director for the Joint Center for Housing Studies at Harvard University. “With widespread unemployment, renters and homeowners alike face the prospect of not being able to meet their monthly housing payments.”

According to a rental housing report by the Joint Center for Housing Studies, almost 44 million households are renters. Renters are much more financially vulnerable compared to homeowners, and are not as able to weather financial crises.

Renters make less than half of the average homeowner salary- $40,000 compared to $78,000. According to the National Multifamily Housing Council, 69% of renters paid rent for April 1, compared to 81% on March 1, and 82% for April 1 of last year. For many, asking to pay rent after having been out of work for over two months is just not possible. 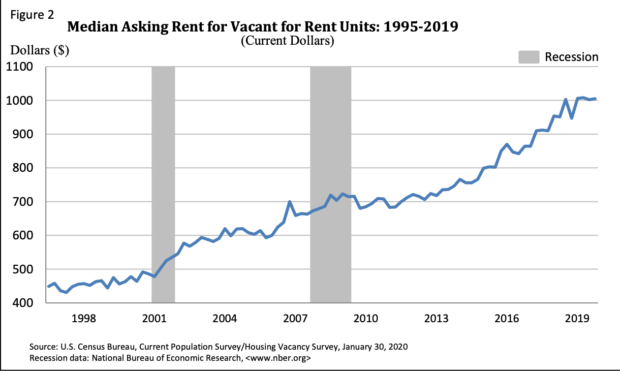 “Emergency rental assistance is needed now to ensure low-income renters can remain stably housed during the worst of the COVID-19 outbreak and throughout the devastating recession it is bringing about,” said Diane Yentel, president and CEO of the National Low Income Housing Coalition President.

Fannie Mae and Freddie Mac, the government agencies that back the mortgages of millions of American households, suspended foreclosures and evictions for at least two months.

Some landlords have recognized the financial hardship that renters face and have cancelled rent, and called for other landlords to do the same.

State governments have also tried to extend help to renters by pausing evictions. The National Low Income Housing Coalition even set up a website that listed various state rulings.There’s also the $1,200 stimulus checks (if you qualify).

“There are studios that cost $1,500 a month,” says Winsome Pendergrass, a Brooklyn-based organizer with New York Communities for Change, which supports the May rent strike. “What will $1,200 do? What if you have other bills that need to be paid? Medications that have to be covered out-of-pocket? Food for your kids?”

In a letter to elected officials, business leaders across New York City put forth a plan to address housing insecurity that included, “Direct federal financial assistance, rent and mortgage forbearance, and/or a property tax deduction for landlords who provide rent concessions to their tenants.”

But delaying or decreasing rent won’t solve the problem. Postponing mortgage payments adds them to the end of the repayment period, which can be years or decades away.

There is currently no legislation in place that would prevent landlords from demanding immediate repayment of months of rent if tenants are unable to pay.

Senator Michael Gianaris (D), of Queens, introduced a bill to waive rental payments for tenants and small businesses, as well as mortgage payments for landlords of those tenants for 90 days. Payments waived in this period would not have to be repaid.

“There hasn’t been enough support for the thousands upon thousands of people who just had their jobs pulled out from under them and yet are still expected to fulfill financial obligations,” Sen. Gianaris told Rolling Stone magazine. “It’s a gross dereliction of duty for the government to tell someone they can’t work but they still have to pay their bills.”

The record-shattering surge in jobless claims is a likely indicator that many will not be able to make rent on May 1.

“How can I earn income if I can’t go into people’s apartments to clean?,” Leftord said. “How will I make up that back-rent?”