Record-Shattering, and Not the Good Kind: US Unemployment Rate Soars to 14.7% 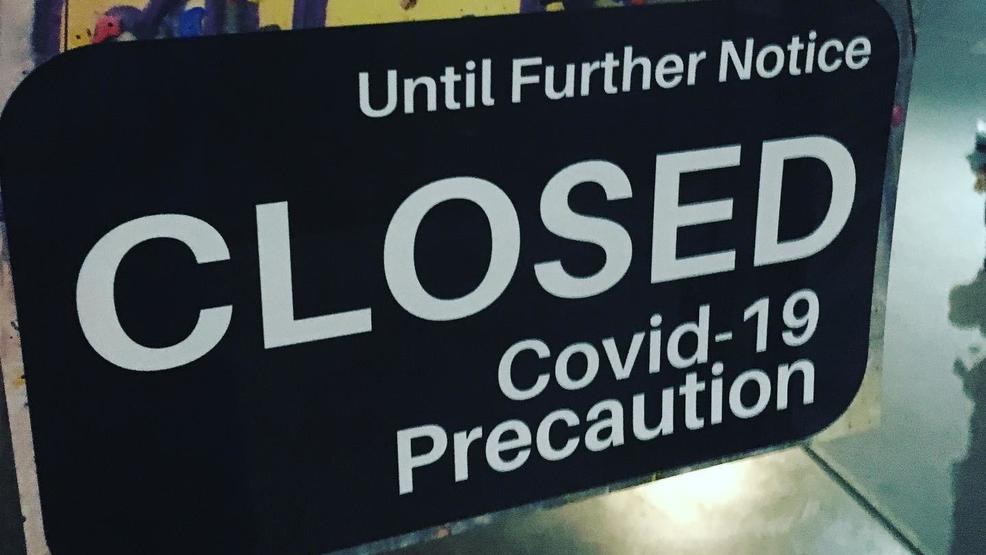 The coronavirus has taken the US labor market hostage.

According to data released today by the Bureau of Labor Statistics, the US has reached levels of unemployment not seen since the Great Depression. Non farm payrolls lost 20.5 million jobs, and the unemployment rate is a staggering 14.7%.

“To give some perspective – the number of job losses over the last two months would fill all 30 major league baseball stadiums 16 times over,” said Elise Gould, senior economist at the Economic Policy Institute. 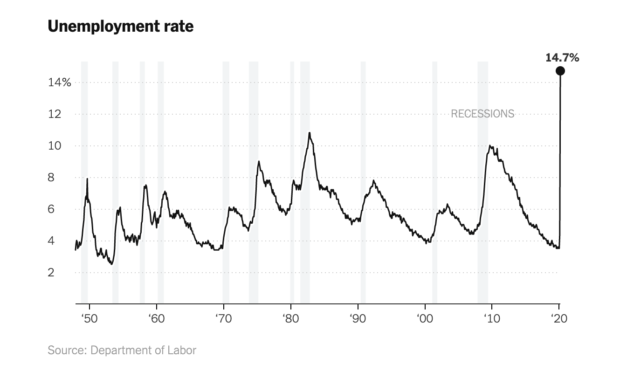 While March’s unemployment numbers ended a 113-month streak of job gains, April’s numbers show how quickly and sharply the labor force contracted due to the coronavirus. The share of the population that still has a job dipped to 51%, the lowest it has been since 1948. Not only has the virus devastated the dining and retail sectors, it is beginning to creep into white collar jobs.

The damage may be worse, as thousands more American’s have been laid off or furloughed after the unemployment survey was conducted the week of April 12. The report also noted that the response rate was lower than usual, and that there was some classification confusion.

The report noted there was an increase in the number of folks classified as, “employed, but absent from work.” This could mean having a job, but staying home due to illness (trying to flatten the curve), childcare problems (since schools are closed), or maternity or paternity leave.

This is worth noting: If the number of employed but working had been correctly labeled as temporarily laid off, the unemployment rate would have been almost 5 percentage points higher – an unemployment rate of almost 20%.

The survey also leaves out independent contractors, such as freelancers or consultants, and gig economy workers, like Uber drivers. The unemployment numbers also do not count folks who’s hours have been cut.

Julia Murray, 28, works at a podiatry clinic in Birmingham, AL. She usually works 40 hours a week as a medical assistant. When her state started sheltering in place, the number of patients dropped significantly.

“How much we work is reliant on how many appointments we have that day,” she said.

Her boss tried to keep her and the rest of staff on full time, but with only a few severe cases coming in, there was no need to stay the full day. Her hours were cut in half.

Trying to Save Small Business

It is no surprise that the hardest hit sectors were in leisure and hospitality. Bars and restaurants across the country are either closed or getting by on takeout orders.

Congress tried to help by rolling out the Payroll Protection Program – a loan meant to incentivise small businesses to keep workers on payroll.

Chef Hosea Rosenberg is the owner of Blackbelly and Santo restaurants in Boulder, CO. He laid off 90% of his staff early on, bracing for the worst.

He secured a PPP loan for both establishments, but is concerned about the lack of guidelines around the loan, other than 75% must go toward payroll, and it lasts eight weeks. Even with the PPP loan, he is nervous to bring staff back.

“I don’t want anyone to feel unsafe or end up sick,” Rosenberg explained.

He also noted that the loan conflicted with unemployment benefits. Some of his staff make more on unemployment than they would if they returned to work.

“Even if they did come back to work, when the PPP runs out, there’s a chance they lose their job all over again,” he said.

Other sectors of the economy that are usually recession-proof are showing signs of wear as well. The report shows physician and dental offices have laid off or furloughed staff as folks skip checkups. There are even some nurses and doctors who are out of work as hospitals forego elective surgeries. There were also losses in child-care services, as schools are closed and parents have no need for a babysitter while working from home.

White collar jobs are starting to feel the effects as well. Unemployment in business and professional services is up from 3.5% in April of last year to almost 10% this April, despite usually being work-from-home friendly.

Sectors that are recession-resistant are often occupied by women – think healthcare (nursing, dental assistants, home health aides), teaching, and childcare. The unemployment rate for women 20 years and older was hired compared to men – 15.5% versus 13% – which is unusual in a recession.

“During the Great Recession, a majority of jobs that were lost were those held by men in construction and manufacturing,” Pollak explains. “This time around, women are taking the hit.”

Racial and ethnic minorities are hurting as well. The black unemployment rate rose from 6.7% in March, to 16.7% in April. Hispanic unemployment is even worse – up from 6% to 18.9%.

There are glimmers of hope. Around 78% of unemployed Americans were classified as temporary layoffs, meaning that many expect to go back to their job.

Another measure to keep in mind is that the number of people working part time for economic reasons (read: COVID-19) nearly doubled over the month. It could be that employers are keeping staff on but reducing their hours – better than letting them go entirely.

“The jobs market will have a much easier time recovering if workers and businesses are able to maintain their existing relationships,” Dr. Michael Farren, a research fellow at the Mercatus Center at George Mason University, wrote in a note. Giving a current worker their hours back is much easier than finding and training a new employee.

Both are signs that the labor market could bounce back faster as states begin to reopen. But this comes with it’s own cautions – the longer the economy remains in a rut, the harder it will be for companies to keep on workers, which may cause temporary layoffs to become permanent.

This was a painful report, but not surprising. The coronavirus essentially ground the economy to a halt. It’s clear that employers want their workers to return, but it is doubtful that next month’s report will bring good news. The job now is making sure that those who cannot work are supported by unemployment or PPP loans until states and businesses can safely reopen, or until wide-spread testing becomes available. Needless to say, it will be a while before we head back into the office.