Centre Country feeling less economic pain than others in Pennsylvania 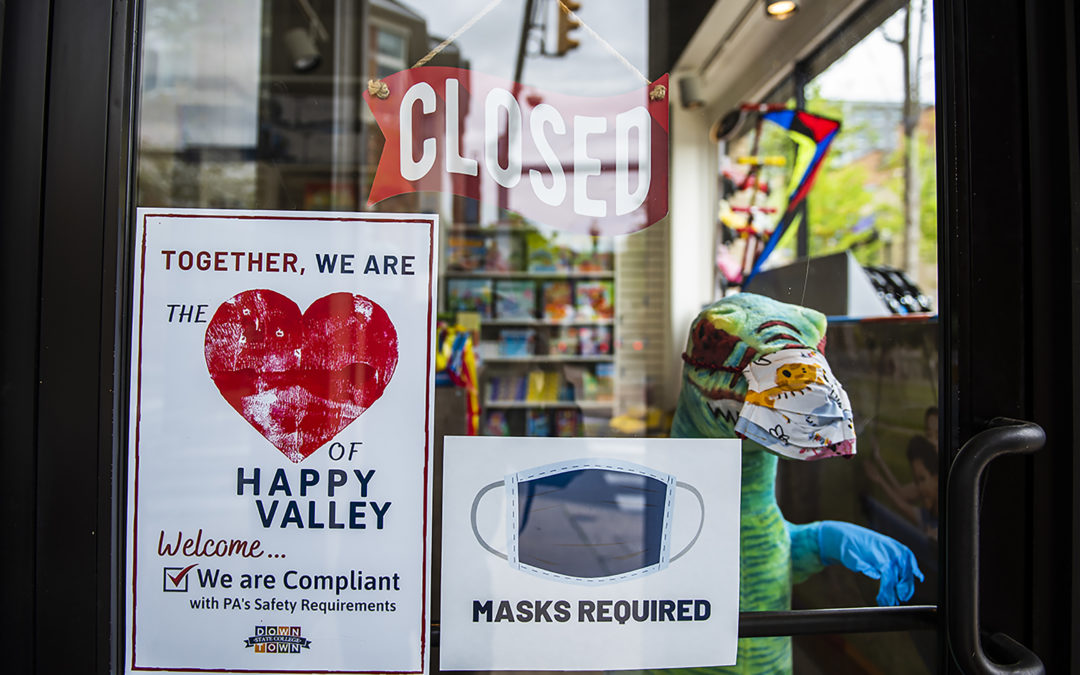 Pennsylvania is among the states hit hardest by the coronavirus, with 1,907,314 unemployment claims filed from March 15 to May 20. But Centre County, in the very middle of the state, is suffering less from shutdowns than the rest of the state.

As a university town, even though the shutdown of the campus, Penn State University has not engaged in extensive layoffs, but no one knows if that will continue if students do not return to campus in the fall.

“I would say that Centre County is going to be able to serve itself during the coronavirus,” said James Tierney, an assistant teaching professor of economics at Penn State University. But since its economy is largely driven by Penn State University in State College, he said, the current shutdown is likely to hurt it, at least until students return to campus.

As the U.S. unemployment rate rose in April to over 14 percent – the highest since the Depression, according to data on initial claims by week and state — Pennsylvania’s labor market also went through a dark time from mid-March to the end of April. Around 20% of the state’s workers filed claims since March 14, 7% more than even New York State, according to the state Department of Labor and Industry.

Centre County had the fewest unemployment claims among Pennsylvania counties in the three weeks from mid-March to mid-April. Some companies, including Wegmans and Walmart, are still hiring in the county. Only at the start of this month did Penn State begin furloughs at 50 percent pay, said Paul Grieco, an associate professor of economics there, but the university hasn’t laid off employees so far, according to an announcement of Penn State President Eric Barron.

“Pennsylvania is only second to California for job loss in the highest unemployment claims,” said Katherine Eva Maich, an assistant professor of labor and employment relations and women’s, gender and sexuality studies at Penn State. “So in a way, we’ve really been hit hard as a state.”

Why Pennsylvania’s unemployment rate is so high

Pennsylvania was among the first states that ordered businesses to shut down to slow the spread of the coronavirus. On March 19, Gov. Tom Wolf ordered all non-life-sustaining businesses to close their physical locations.

“Every human-to-human contact is a chance for the virus to spread,” Wolf said in late April, “so more contacts mean a higher likelihood of an outbreak.”

With two metro areas and its location close to New York, it was impossible for Pennsylvania to protect itself from the coronavirus. “There’s a combination of these large metro areas with Pittsburgh and Philadelphia,” said Tierney. “Philadelphia, specifically, having the airport where a lot of people connect.”

Why Centre County is having an easier time

Dominated by a college town, Centre County is very different from most counties in Pennsylvania because its core economy is closely dependent on Penn State University. According to a study released in 2019, the University Park campus of Penn State provided 52,231 jobs and contributed more than $11.6 billion to the state’s economy and supporting in fiscal year 2017.

“With not having as many students here currently, that just makes us have a little bit more room,” Michael Pipe, chairman of the Centre County Board of Commissioners, told The Centre Country Gazette on April 30.

Some regional programs to help businesses are now in process. The federal Paycheck Protection Program and the Pennsylvania Industrial Development Authority are providing loans and grants to local businesses.

Team Blue Hand Car Wash and Detail in State College reopened on April 18. “We didn’t lay anyone off, and we actually ended up getting a small business loan from the government,” said Joe Svoboda, a co-general manager. “We’re happy to have the customers do come out, but definitely the coronavirus has affected us a little bit.”

But with Penn State empty of its students, the local economy will be hurt, experts said. “It represents 50,000 people that are not here,” said Dave Brown, a director of undergraduate studies and a teaching professor of economics at Penn State. “If they’re not here, they’re not buying and spending.”

Josh Baylson, a cashier at a Uni-Market convenience store a 10-minute walk from campus, said the store’s customers had sharply decreased since March.

If Penn State continues online this fall, there will no football games. “The lack of a football season would greatly hurt the local economy, as the games bring in 100,000-plus people who spend money on Penn State clothing and game tickets, as well as food, dining, gas, and lodging,” Brown said.

“No football would represent a huge reduction in demand for many of these local places,” he added.

All school-related businesses will also be suspended, including Central Pennsylvania Festival of the Arts, and conferences. What’s more, the service industry and rental market in Centre County will be devastated.

“Bars, restaurants and hotels are really going to be hurt by the students not being here,” Tierney said. “Not that the students themselves use the hotels, but when parents come back for graduation. So hotels are getting crushed as well.”

“A lot of students would rent their apartments,” he added, “but now they’re either not going to if they don’t come back in the fall, or they might try and get out of their lease as early as possible.”

Is it too soon to reopen?

Centre County will be among the first 24 counties in Pennsylvania to partially reopen, moving from red phase to yellow phase since May 8. “Working together, we Pennsylvanians have flattened the curve,” Wolf said.

The state’s guideline for reopening is fewer than 50 new confirmed cases per 100,000 population over a two-week period. With a total of 136 confirmed cases in a population of 841,000, according to the 2010 census, Centre County meets the requirement, though local officials said full reopening would take the rest of the year, if there is no second wave of virus.

“I think that the citizens are handling it really well,” Pipe said. “And we’re trying to do our best to take each day, day by day. So I’m very hopeful for the future.”

Some experts say they think the reopening may not be the right decision. Low consumer confidence is a major factor.  “Ultimately, it is consumers who will decide whether business should be open,” Grieco said. “With so many activities still restricted, it is going to be hard for consumers to have confidence that it is worth the risk to go out.”

“With so much of the local economy being focused on services, that won’t amount to a full re-opening,” he added.

Tierney said: “I don’t see us going really back to normal until we have some sort of vaccine, which may not be till next spring semester. I can see us reopening bit by bit, but I don’t foresee us being able to have large type of lecture classes that Penn State has, and I don’t see us having football with a bunch of fans.”

He also said the county shouldn’t be so reliant on the student population. “We should try our best possible way to diversify the industries that are in town,” he said. Agriculture, traditional manufacturing and mining, and high-tech manufacturing are other main segments of the County’s economy.

Brown said he was looking forward to going back to his office and teaching in the classroom. “My kids haven’t seen their daycare and preschool classmates in almost two months, and we’ve had them at home every day,” he said by e-mail. “However, I am pessimistic that PSU will reopen this Fall and am planning on just being remote again. Classrooms (especially large ones) will be deemed too risky.”

“I’m just glad that I’m not the one who has to make the decision to reopen or not,” he added.

Maich said she was concerned about safety. “We have to value the human cost right,” she said.

“We have to think about people’s lives and their families, and their safety first, before we only consider this through an economic lens.”