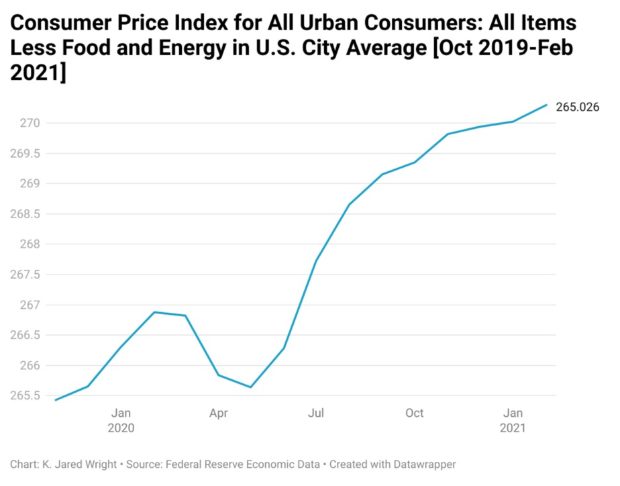 Prior to the release of February’s Consumer Price Index (CPI), many economists feared a spike in prices across all indices. As the end of the pandemic appears to be in sight, qualms over rising inflation coincide with the distribution of the first COVID-19 vaccinations. Along with the vaccines, rising inflation fears are compounded with the $1.9 trillion COVID-19 relief package that was passed on March 10th, providing $1,400 to a number of taxpayers

The Consumer Price Index in February increased by 0.4% from last month, and 1.7% from a year earlier, the Bureau of Labor Statistics reported Thursday. The core CPI, which excludes food and energy prices, increased 0.1%, rising to 1.3% over the past 12 months.  Economists say the core index paints a more accurate picture of what happens month to month because food and energy prices are volatile.

The prevailing thought appeared to be that consumers would be rushing to spend money as the distribution of vaccines commences. While some of the movement in the CPI will likely be propelled as vaccination numbers surge higher, this was not the time for that.

Within the core CPI, prices in key categories such as shelter, recreation, medical care, and auto insurance all rose, a sign that a rise in inflation is coming due to a possible spike in housing costs and consumers attempting to have activities outside of their homes as the warmer months approach.  Airline fares, used cars and trucks, and apparel saw a decrease, which suggests consumers are holding on to their money and waiting to travel. While airline fares have plummeted throughout the pandemic, Price said the declines probably won’t last long because as long as there is not another major spike in Coronavirus cases, demand for flights will soar this spring.

There are “an awful lot of people trying to take vacations,” he said. 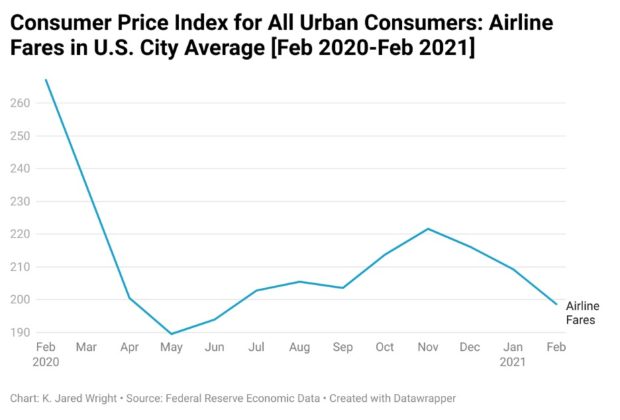 “People have money, and they’re going to be looking to spend it,” Price said.

But most economists aren’t worried that inflation will spin out of control.  Carl Riccadonna, the chief economist at Bloomberg, said the U.S. is “not going to see a lot of inflation for the foreseeable future. According to Riccadonna, even if inflation does increase, that wouldn’t necessarily be a bad thing. “Until we see workers’ wages starting to rise, there will be no cost in inflation,” he said.