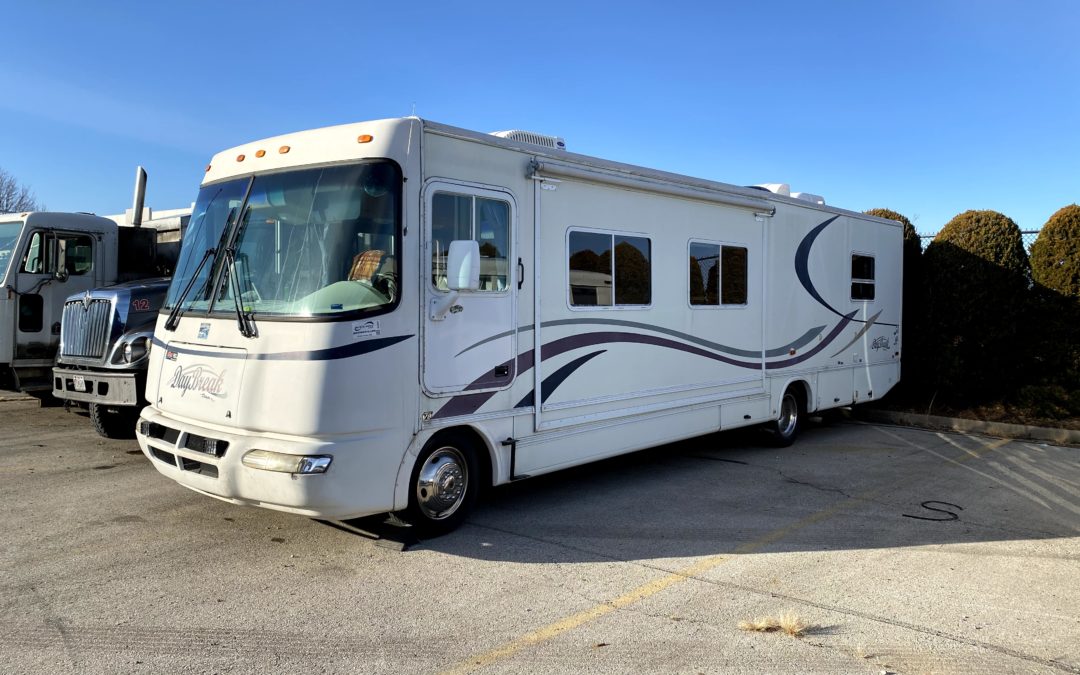 Jennifer Peters was looking for another quarantine project and a bit of an escape at the start of the year. When the offer to buy a NASCAR-sticker-covered 2001 Damon Daybreak RV fell into her lap in February, she and her husband jumped on the opportunity.

“My kids are home all the time now,” said Peters, a librarian at Greenlease Library in Kansas City, MO. “So my husband and I get a little bit of a break to go and work on the RV and work on the renovation sort of outside of the house. That was helpful.”

The Peters weren’t the only family to buy an RV since the start of the pandemic. Both January and February of this year showed the best RV shipment total on comparable record, according to the RV Industry Association. Last month alone, there was an increase of 30.1%, with 11,173 more RVs being shipped than the previous year.

Retail sales of RVs have trended up over the past year and into 2021, according to Rusty Eckstein, owner of Mount Comfort RV in Greenfield, IN. He says the dealership has seen upticks in sales year after year, but they saw an uptick “pretty much every month last year,” making 2020 the best year they’ve had.

“You know now, the idea of people being able to live in their own space or travel in their own space, I think became extremely appealing with the pandemic,” he said. “I think we’re going to see more and more customers coming in interested in the RV industry.

The RV industry has been steadily growing over the years, with the latest data in 2017 showing an 81.5% sales increase since 2012.

The rapid growth in RV sales during a recession is unusual. Normally, during bad economic times, Americans tend to spend less on big ticket items like RVs. This recession has been different though. With people not being able to do their usual travel activities, more money is being put into ways to travel safely.

Bryce Gills, an economist at First Trust Portfolios LP, explains that the Coronavirus recession is “really weird from a historical standpoint.”

“Well, this time around, we’ve seen things like RVs, things like boats, or people getting pools installed in their houses, all these things have kind of soared over the past year,” he said.

Peters was one of many who was able to keep her job during the pandemic, making it easier to save up enough money for an RV. She and her husband have also been lucky enough to get a good deal, only spending $7,500 on it.

“It was kind of in our ‘maybe in the next 10 year plan’ plan,” she said. “The availability plus the meaning of a pandemic project helped speed up that process a bit.”

But even as demand has set records, RV production has actually slumped during the pandemic. Once the pandemic was in full swing, companies laid people off due to COVID-19 regulations and panic. Employment in manufacturing is still down significantly from pre-pandemic levels.

“What we’re seeing is, while the demand appears to be at an all-time high, our production levels are significantly down from where they were a couple of years ago,” Eckstein said. “A lot of manufacturers would tell you they’re running at about 30-50 percent capacity right now.”

Gills added that supply chains cannot keep up with demand, leading to a “ripple effect” that eventually slows production.

“These supply chains across the board are completely screwed up,” he said.

Kenny Schmitt, manager of W.E.S Trailer Sales in Wading River, NY, said that sales have been up since last year, with many customers placing orders during the winter. Even so, Schmitt sees the same manufacturing problems.

“We’re selling units, but we don’t have any stock,” he said. “Manufacturers cannot get caught up so it’s pretty much like they’re just building the units that are sold units for customers. So, stock I won’t have for probably over a year.”

Gills says that even with a lack of capacity at manufacturing facilities, the rising sales in the RV industry alone is a good sign for the economy and show a positive outlook on more manufacturing jobs.

“I think we will see the labor market recover extremely fast this year,” he said. “I think a lot faster than a lot of people are expecting. I also expect, you know, the net gains that we’re seeing each month to really ramp up from here, as a lot of this basically saved money or pent up demand is actually spent.”

Job openings are up significantly in the manufacturing sector from pre-pandemic levels, a good indicator that production can slowly begin keeping pace with demand.